A ruggedly handsome young man rides up to you on the back of what appears to be a feral white tiger. Yet as he gets closer there are a few things about this large feline that hint at an otherworldly influence. It’s ears are slightly elongated and end in a finer point. The colour of its coat seems to be more ashen than startling white. And finally as the rider and beast engage you, you see an unnatural green glow emanating from its jade eyes. Rather than dismounting as current social culture might suggest he leaps up out of his saddle and walks up to stand upon the creatures shoulders as he talks – talking to you at eye level. His blonde hair is pulled back in a pony tail that hangs down just past his shoulders. He sports facial hair that is a few hours past 5 o’clock. His emerald eyes would be visually stunning if it weren’t for the glow coming from his magnificent mount stealing his thunder so to speak. Order of the Cockatrice Cavalier.
Adopted oldest child of a Surtova household

A brief history lesson:
Kerubiel’s adoptive parents were unlucky nobles that could not have children. However, one night the at the edge of their manor lands they discovered a small babe underneath the travelling cloak of a recently murdered halfling woman. They had one of the farm hands make a proper grave for the woman, but never told this wee halfling child that is how he came to be apart of their family.

Kerubiel was brought up in a very loving household until the point in his life where his parents – Lord Arthan Surtova and Lady Lanessa, could no longer pass him off as a small human boy. He met the current king on his 5th birthday, whom he overheard say to his parents when he was supposed to be sleeping, “a bit of runt, but he’s bound to grow up big and strong being a Surtova.” It was after that that his loving parents became a little more distant. He was trained by the family retainer as a cavalier (Savren). He excelled in almost all aspects of his warrior training, save for horsemanship, being of halfling origin he was just not suited to riding a horse.

It was then on his 7th birthday that the biggest change happened in his life, his mother became pregnant – a divine miracle because the couple had tried and tried and had not been able to conceive. Looking back, Kerubiel can remember that his parent’s religious affiliation had switched at that point as well. His mother gave birth to twins – a boy (Dairius) and a girl (Leezel). No longer needing him as their heir, his parents paid even less attention to him now and doted completely upon his two siblings. As they grew up together Kerubiel studied as hard as he could as a cavalier and would often try to best his younger brother at everything he did just to impress his parents.
It was when Kerubiel turned 13 that the last part of his cavalier training was introduced – the way in which to live his live. Savren belonged to the Order of the Cockatrice and bestowed in him the beliefs that he should live by. He soaked up these ideals and withstood his parents neglect knowing that he would one day have more than them and they had at least given him a nobles life.
On his 17th birthday he left the family manor to strike out and make a name for himself. After his first day on the road he ran into a hunter who had a strange cat in tow, who appeared to be injured. In seeing the cat Kerubiel had an awe inspiring vision of himself riding this beast and he offered to trade his pony and a significant amount of his ‘inheritance’ money to this hunter. The hunter finding this an incredible deal, took the trade. After the hunter left, Kerubiel discovered that his merchandise was in fact injured and he cursed the hunter, but looking into the beasts eyes he felt a connection and he nursed it back to health.
Out of money, and wanting to make a name that one day the whole world will know, Kerubiel has signed the charter. 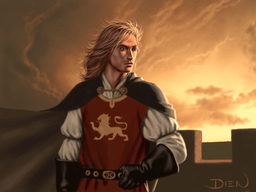