Appearance:
Though short, he is extremely well muscled he possesses a build much greater and broader than that of the average man. His arms are long and heavily muscled and his hands end in thick fingers with short round nails. His skull is extremely solid (able to absorb impacts that would cave in a human skull) and covered in dark chestnut brown hair that is braided and hangs down to his shoulders. A heavy brow and dark eyebrows shade his face. His eyes are heterochromic, a trait extremely rare in dwarves. One eye is emerald green the other sapphire blue and have a tendency to sparkle when he laughs. He has broad white teeth and a heavy jaw line though it is largely obscured by his long beard which he braids into forks and often keeps thrust into his belt. His skin is leather tough and dotted with scars. Glanrim is clad in hauberk of steel mail that hangs to his knees and his legs are protected by leggings of a flexible metal mesh. Overtop he wears a padded leather jerkin and a broad black leather belt around his waist. His feet are clad in heavy black boots and cap of iron protects his head. A crossbow is slung over his shoulder and a sword, dagger and qiver of bolts are strapped to his side. In his hands he carries a dwarven two-handed great axe.

*Personality: *
Generally speaking Glanrim is a bawdy, lively, outspoken, and a rough and tumble nomad. He is partial to noisy gatherings, wrestling, roughhousing, practical jokes, loud laughter, story telling, music and the occasional brawl. He respects strength and courage but places greater emphasis on strength of character than raw power. He possesses an ancient code of honour forged in the mountains through generations of dwarven tradition. His dogma is to live hard, play hard and die with honour. Loyalty and honour to one’s friends and family is most important followed by strength, courage, wisdom, compassion and mercy. It is to be noted however that traditional dwarven mercy is a swift death. Above all Glanrim values freedom: freedom of personal expression, freedom from oppression and freedom to live as a warrior. He does not fear death as he believes that all die someday, it is how one lives that is important.
Glanrim is different from most of his kind in the manner that while he loathes orcs and goblinoids, he is willing to put aside his misgivings about half-orcs and work with them so long as they prove to be trustworthy, honourable or if the price is right. In combat or hostile or dangerous situations Glanrim is absolutely cold, so much in fact that his face appears chiselled out of stone. Facing down an opponent with such intensity and coolness makes him eerily disturbing for his opponents. This inhuman calm and defiant confidence is unnerving and challenging. So much so that his opponents often become unsure of themselves, nervous and even frightened

Glanrim is actually the grandson of the ancient dwarf king Deloril Brynkuld. Unbeknownst to many Deloril actually had a second son named Thogal. However, the child was born out of wedlock to a dwarf commoner so it was believed that the boy would never be heir to the throne. Throughout his childhood did not know who his father was; his heritage was kept a secret in order to prevent a scandal from breaking out. However, the king was an honourable man and saw to it that the boy was raised as a noble. For most of his life Deloril acted the part of a doting uncle for the boy and Thogal and the king’s son grew close never realizing they were actually half-brothers The death of Deloril’s eldest at the hands of the goblins might have changed the situation had it not been for the arrival of the orcs. Questions of ascension and heirs were forgotten in the desperate struggle for survival that followed and when the citadel of Ril Karag fell all records were lost as the orcs defiled and burned everything within the city. By this point, Thogal was a young man and skilled fighter in Deloril’s personal guard. When the city was on the verge of collapsing he sent his young wife with the last caravan out of the city before returning to make what he thought was a last stand with his king. Thogal and the king survived and were rescued by the humans. Joining the alliance Thogal was an instrumental leader in many battles against the horde leading his dwarven brethren into battle. Then one night he was called into the tent of King Deloril. Arriving he was horrified to see that his king had taken a slayer’s oath and was preparing himself for death through battle. The old king waved off Thogal’s pleas for him to change his mind and instead had him sit down. Once seated Deloril told Thogal of his true heritage and how it would be his responsibility to lead the dwarves once the war ended. Rising Deloril embraced his son and removing his crown pressed it into Thogal’s hands. After giving Thogal firm instructions to stay at the camp Deloril took up his axe and set off to find his death. Defying his father’s last wish Thogal secretly joined the dwarves marching with their king. Leaving the crown in the care of his wife, Thogal stood with Deloril in his last battle. Despite the odds Thogal survived and, with a few remaining dwarves managed to return to camp carrying the body of their king. The war was far from over and fearing that the crown would be captured by the orcs Thogal had it sent far to the east to an ancient dwarven vault where it would be kept safe until the war was over. When the war finally ended Thogal went to travel to the vault to claim the crown. Unfortunately, the lands between had been infested by the remnants of the horde and their troll allies and passage proved to be impossible. Unable to raise an army and tired of war and fighting, Thogal returned to his wife. Settling in the Hungry Mountains he opened a smithy and forsook his destiny. Eventually, in the twilight of his life he had a son. When the child was born he noticed immediately that the boy was heterochromic like his grandfather had been. Something stirred within Thogal and on a whim he bestowed the name Glanrim on the child, further testament to his kingly heritage.

As Glanrim grew up his father raised him to be a might warrior. The training was hard and brutal at times but Glanrim thrived and grew strong. By the time he was old enough to braid his beard, his reputation as a skilled fighter and trapper was second only to his reputation for his ability to consume vast quantities of ale. Joining the militia he journeyed deep within the mountains of his home and hunted orcs and goblins without mercy. Having reached an extremely old age for a dwarf, Thogal eventually grew frail and ill. Glanrim took up a vigil next to his bed and did his best to make his father comfortable. He would run the smithy during the day and spend the nights awake caring for his father. One night as Glanrim was dozing in the chair next to his father’s bed, he was woken suddenly by the sound of Thogal’s raspy cough. Rising he found his father looking down at his hands, they were speckled with blood. Before he could grab a towel to clean the blood Glanrim’s father seized his hands and pulled him close. Despite his frail appearance there was still strength in his grip and Glanrim bent his head to listen. In a hushed whisper Thogal told his son the truth about his heritage and that as the grandson of Deloril Brynkuld he was now the lost heir to the throne of Ril Karag. After telling his son about the vault containing the crown, Thogal collapsed back onto his bed and died. Glanrim mourned his passing for a month in solitude. His grieving process finished Glanrim sold his father’s smithy and struck out into the world to seek his destiny. Joining a caravan as a guard he eventually made his way to the Kingdom of Brevoy. There in the heart of the kingdom was a solitary mountain and a dwarven city which contained the vault his father had told him of. Five years later he reached the city. To his great disappointment the crown was not in the vault. A careful search of the archives revealed that during the Portal War a caravan had been expected but it had disappeared without a trace near the borders of Numeria and the area now known as the River Kingdoms. Frustrated and out of money having used most of it to reach Brevoy Glanrim travelled to Restov in search of work. Upon inquiring at the town hall he was informed of contractual work in greenbelt area of the River Kingdom. Seeing an opportunity, and rapidly running out of gold, Glanrim signed the charter. While he holds little hope to ever finding the crown of his grandfather, he feels he has nothing to lose by trying and exploring new lands has always been a passion of his 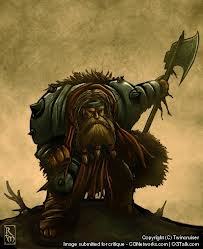